Ph.D, founded in 1988, is determined to serve an enlightened roster of clients with visual acuity, crisp thinking and penetrating wit.

Michael Hodgson’s style can be described as “classic with a twist”: a blend of the bold playfulness championed by his dear friend British fashion designer Paul Smith and the casual cool of his American idol Steve McQueen. Born and raised in London, Michael studied at Saint Martin’s School of Art in London and graduated from Brighton College of Art in 1974. He began his career at the influential magazine Harpers & Queen under the legendary Willie Landels, and served as art director until 1979. Michael is President Emeritus of AIGA (the American Institute of Graphic Arts) Los Angeles and serves on the advisory board of the AIGA Center for Sustainable Design, where he has been instrumental in recruiting over 100,000 design firms and counting to sign the Designers Accord encouraging responsible design. In 2007 he was named an AIGA Fellow, the highest honor awarded by the institute.

A keen cyclist, Michael once followed the Tour de France for a year and a half and, together with photographer Mike Powell, published a book about it: The Greatest Race. Michael is married to Gill Hodgson and has three beautiful daughters: Lily, Maudie Rae, and Lucie. He always, always makes time for a tea break… although recently, due to his increased involvement in cycling, he has been known to substitute that tea for a quick macchiato. 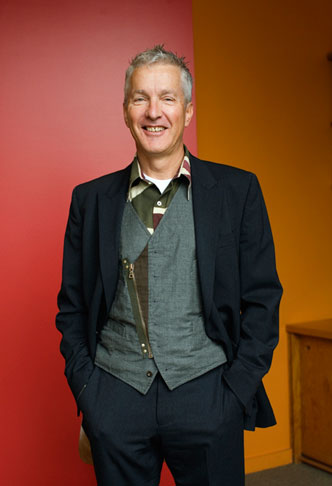